Collectors know that anything worth holding onto isn’t cheap, not even dolls. Well-known brands like Barbie and American Girl dolls have accumulated a ton of value over the years. Whether they are a limited edition, vintage, or both, the valuable dolls you’re about to see here come with a pretty price tag. 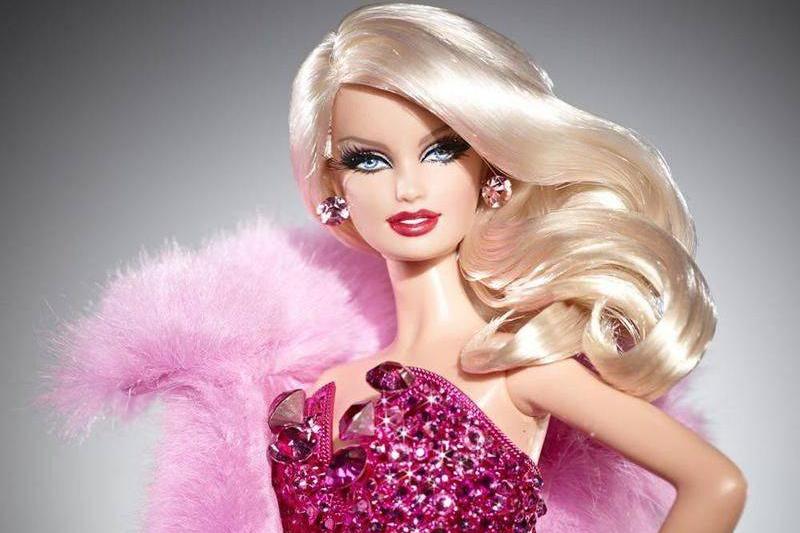 Much of her value stems from the exquisite dress, which is completely covered in small rose and fuchsia diamonds. The Barbie also features diamond earrings that pair with a diamond ring and bracelet. All in all, this fabulous doll is worth an astounding $15,000! 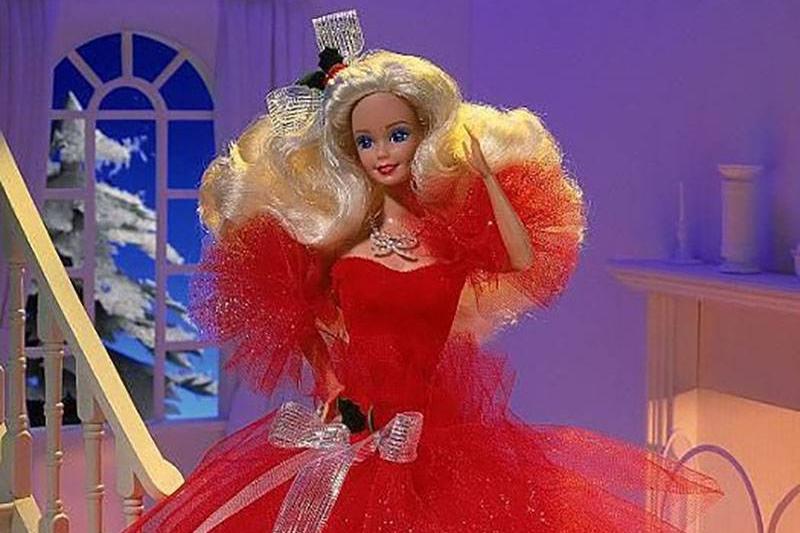 The Happy Holidays Barbie dates back to 1988, as is evident in her tulle-covered dress and the big bow in her hair. The bright red gown pops with its vibrant color, puffy sleeves, and sparkly design.

Since this Special Edition doll is decades old, she’s worth several hundred dollars outright. However, this particular Barbie has a special feature that makes her value skyrocket to $3,000: it’s signed by Barbie inventor Ruth Handler! Talk about a deal! 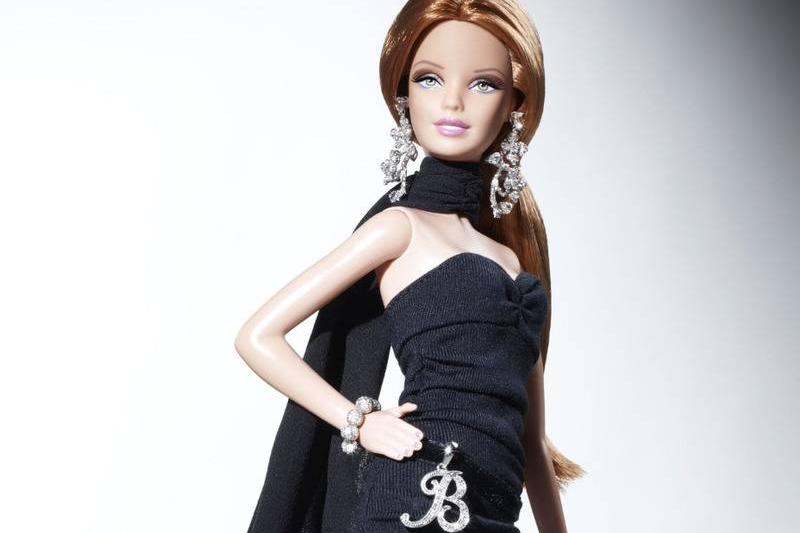 You may recognize the name Lorraine Schwartz as one of the designers behind some of the red carpet’s most stunning looks. The celebrity designer not only inspired this dazzling Barbie, but she also helped create it.

This Barbie’s value comes from her diamond-encrusted accessories, including her dangling earrings and shoes. Perhaps the most distinguishable part of her outfit, though, is the black belt with a diamond “B” hanging from it. These features made the price tag jump to $7,500!

Coming up, this Barbie was made in honor of the 1999 Winston Cup Racing event. 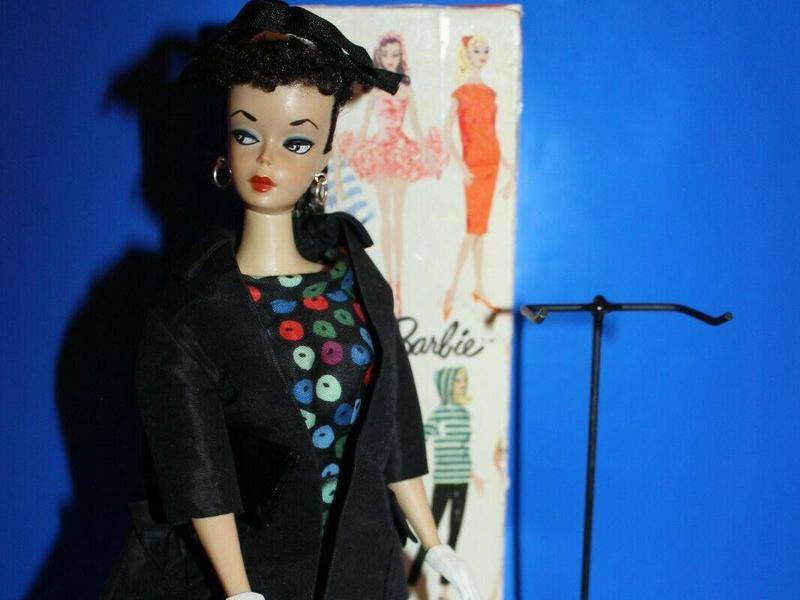 When a doll has a name as specific as Easter Parade Vintage Barbie Ponytail #2, you know it’s probably worth a large amount. This Barbie dates back to 1959 and features a stylish black coat over her vintage dress.

The eBay seller sweetened the deal by including the original box, stand, bathing suit, sunglasses, and booklet. You’ve got to love that unimpressed look on the doll’s face, especially considering she’s valued at more than $10,000 today! 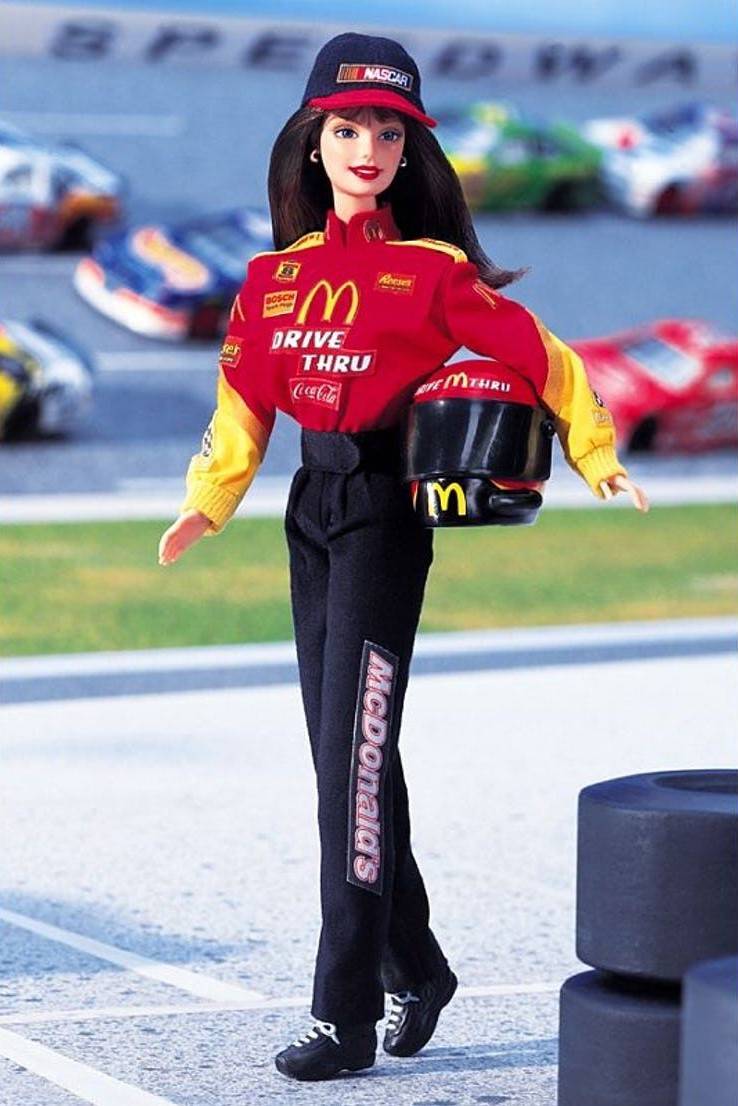 The limited-edition NASCAR Official #94 Barbie has a look, unlike any other doll. Its signature racing outfit features pretend sponsors from some of the biggest companies around, especially McDonald’s.

The doll was released in 1999 to celebrate the Winston Cup Racing event. McDonald’s sponsored the event, so it’s no surprised designer Sharon Zuckerman emphasized their logo in the outfit. Zuckerman is also part of the Barbie Loves Sports series. This sporty doll is worth more than $2,000.

Coming up, this Barbie was inspired by an episode of I Love Lucy. 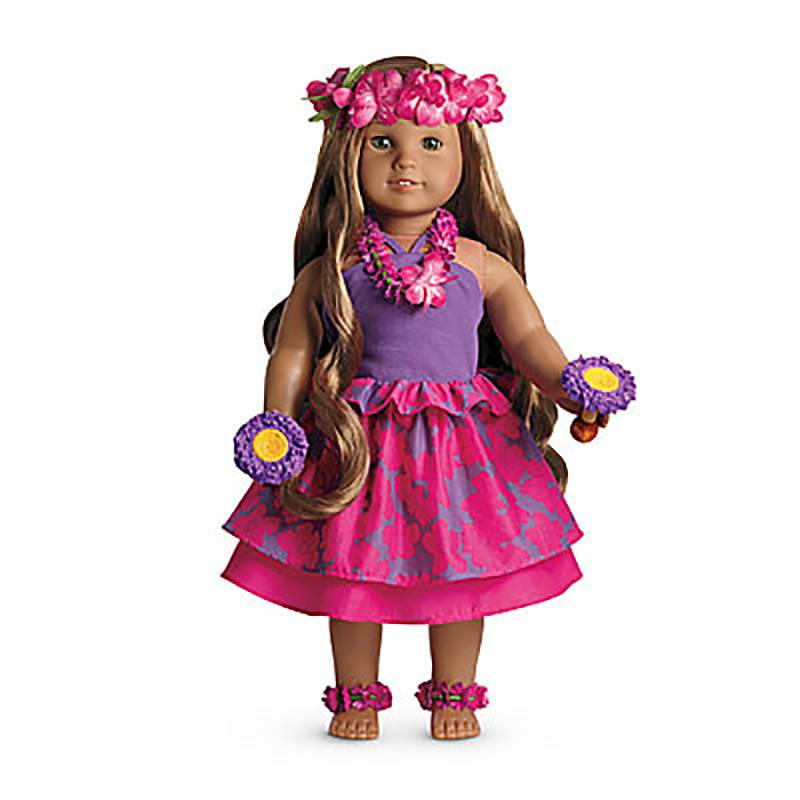 Kanani Akina is an American Girl doll that has a more diverse background than most. With Hawaiian, Japanese, and European roots, Kanani appeals to many walks of life. Plus, she lives on the popular island of Kauai.

Though Kanani hasn’t been around as long as some other American Girl dolls, she is very rare. Kanani was a limited edition Girl of the Year Doll in 2011. For that reason, she’s valued at more than $2,400! 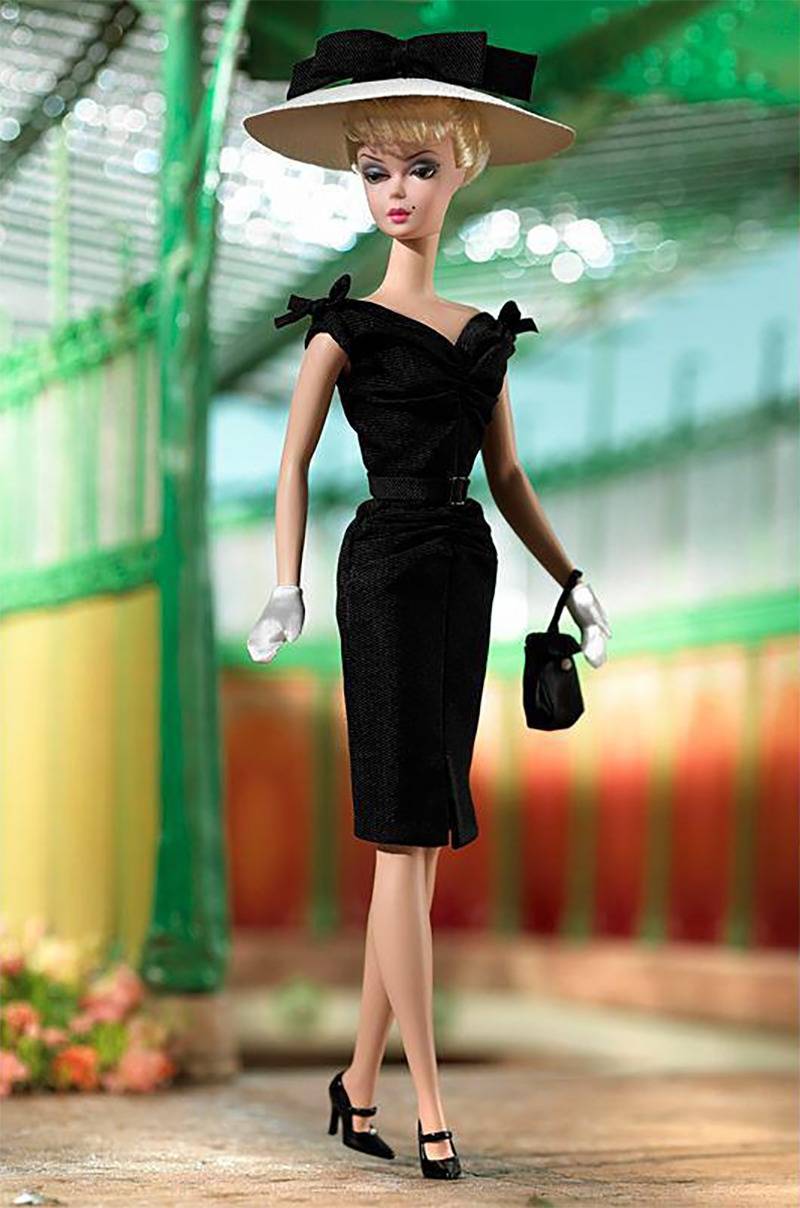 City Smart Silkstone Barbie may look like she’s vintage, but she was actually released in 2003. Designer Robert Best created her outfit as part of the Barbie Fashion Model Collection.

Best did a fantastic job of conveying the 1940s chic look that Mattel was going for. This Barbie’s black dress with a sweetheart neckline and her bold hat make this doll feel like it was created for grown-ups. The designer elements give this Barbie a $2,995 price tag. 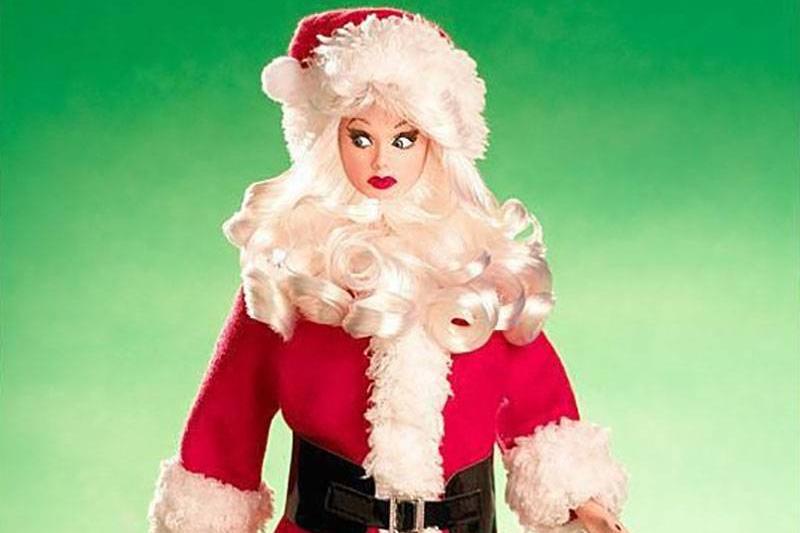 Sharon Zuckerman designed The Christmas Show Barbie. You may have noticed that the face looks like comedy legend Lucille Ball. That’s because the Barbie was inspired by the I Love Lucy episode where the main cast members hilariously dress up as Santa.

There is actually a complete collection of these Barbies that features Ethel, Ricky, and Fred all in the same goofy outfit. The Platinum Edition of these dolls is valued at an impressive $2,000.

Coming up, this Barbie features an authentic leather bag made by Coach! 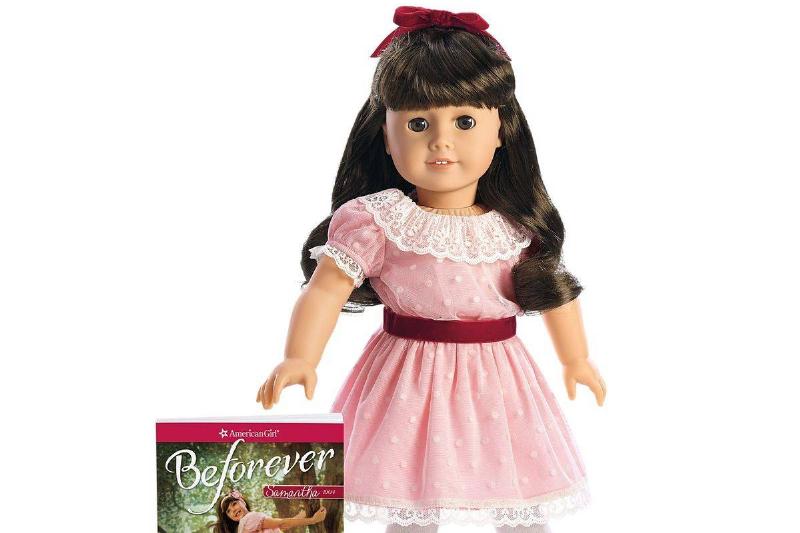 American Girl doll Samantha Parkington was born in 1904, meaning she grew up when child labor laws and women’s rights were starting to surface. The original version of this doll was discontinued in 2009.

However, a newer edition surfaced in 2014. Those who have a Samantha doll from the original era may be in for a large ticket price. Samantha dolls that date back to 1986, their first year of production, can sell for upwards of $1,850! 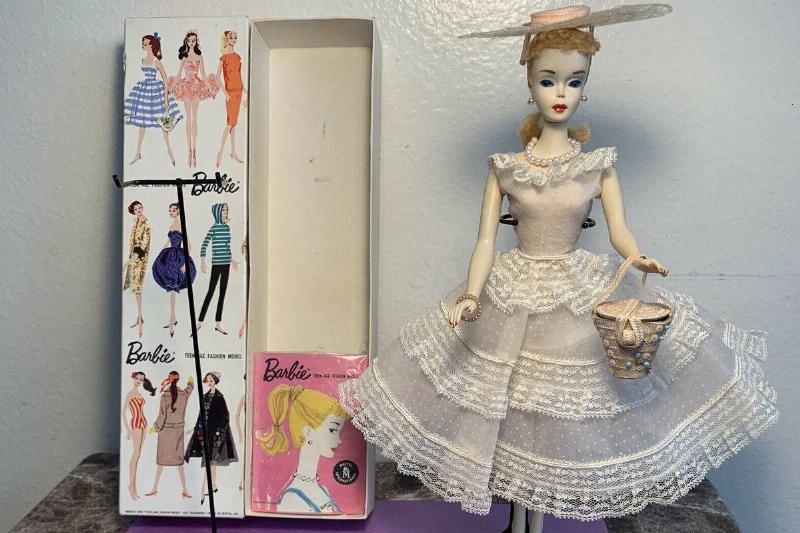 Plantation Belle Barbie stands out among the rest for her vintage style and ornately designed lace dress. Though she doesn’t have any diamonds, she has an elegant look with pearl accessories and a sun hat.

This doll is priced at nearly $3,000, which is high for a used doll even if it is vintage. Something that added to the value, though, is that the owner had her makeup professionally restored. All in all, the condition is nearly perfect. 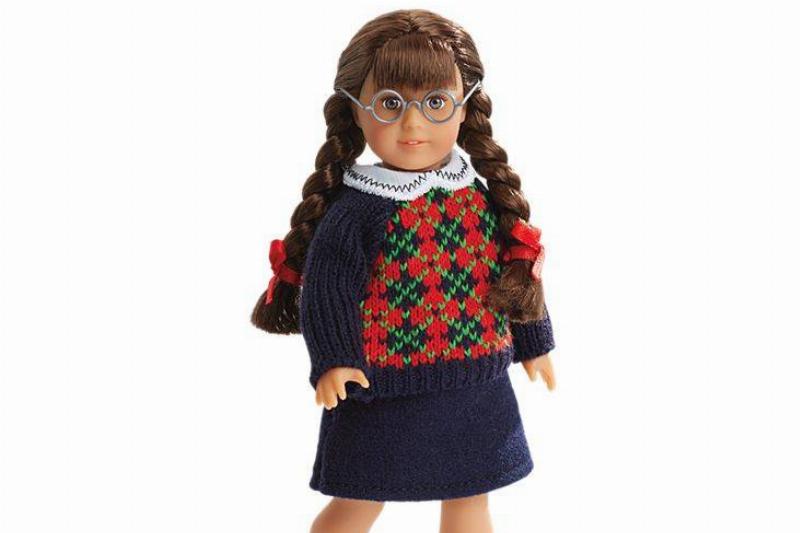 Molly McIntire is an American Girl character who was born just as World War II was nearing its end. Though she was “born” in 1944, earlier editions of this doll date back to 1986.

Such early models are very rare these days, making them highly valuable to collectors. The doll itself can be found for several hundred dollars. However, if your collection includes her various clothes and accessories, that number can jump to upwards of $1,200!

Next: this doll’s outfit features a genuine Coach handbag. See how much she’s worth. 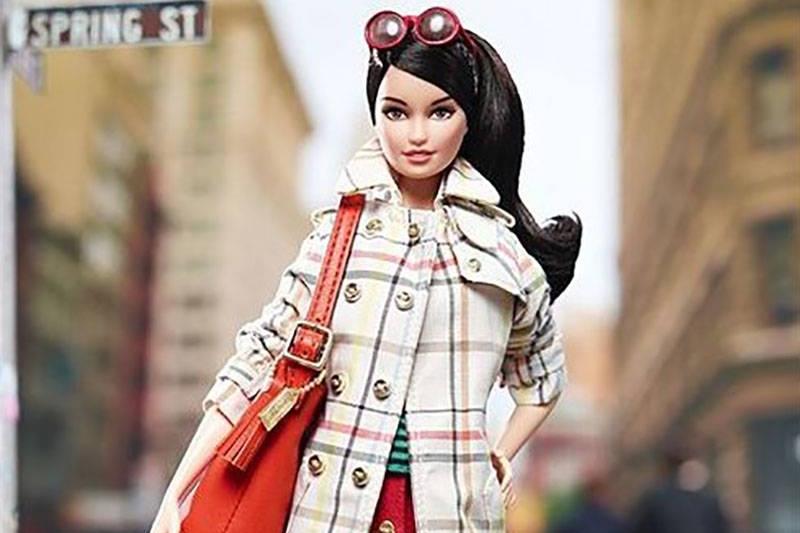 In 2013, Barbie released Coach Barbie as part of their Gold Label. The name and label already position this Barbie to be worth a ton, but there’s another reason she’s so valuable.

This features something that Barbie had never done before. Her handbag is made of real leather! To top it off, the bag was made in an actual Coach handbag factory. There are two other Coach bags that complete the set, which is worth a solid $1,500.

Keep reading to see what makes this Barbie worth six figures! 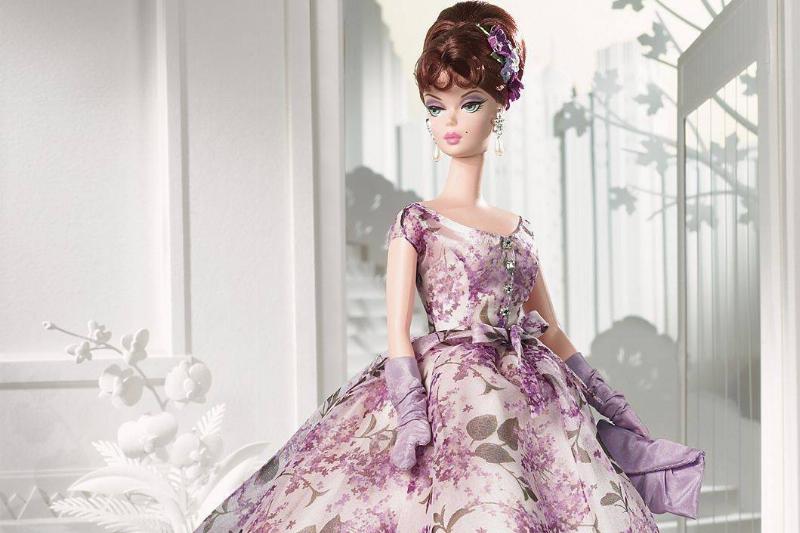 Violette Barbie came out in 2005 as part of the Barbie Fashion Model Collection. The doll features a gorgeous purple gown made of printed silk organza. She’s also wearing elegant purple gloves and has a clutch to match.

The quality details of this limited edition Barbie give her Platinum Label status. As such, the price tag for this doll isn’t cheap. Collectors can expect to spend $1,750 on this designer Barbie so long as she’s in prime condition. 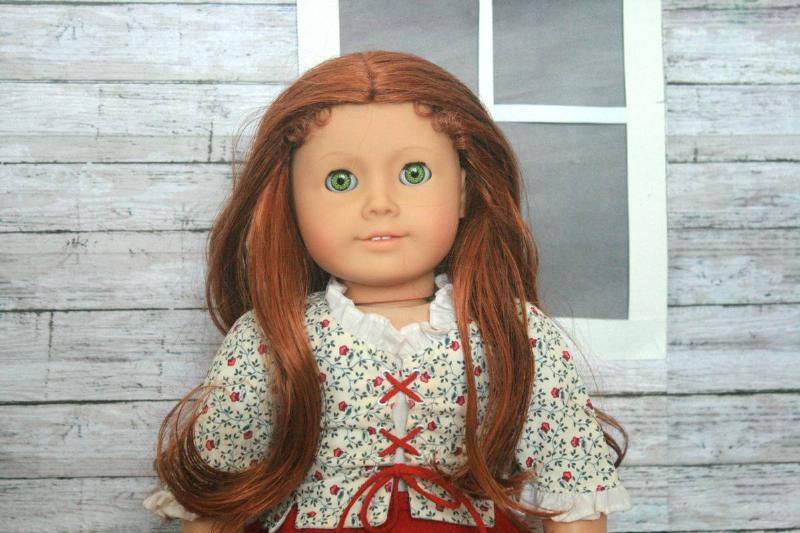 Though Felicity Merriman didn’t hit stores until 1991, her backstory is one of the oldest of the dolls. The colonial-era American Girl doll comes with accessories and clothes inspired by the 1770s.

Born just before the American Revolution broke out, Felicity is as American Girl as they come. Still, she was discontinued in 2011 before being rebooted in 2017 and again retired after that. Those who have the original Felicity doll can earn up to $1,250 by selling her. 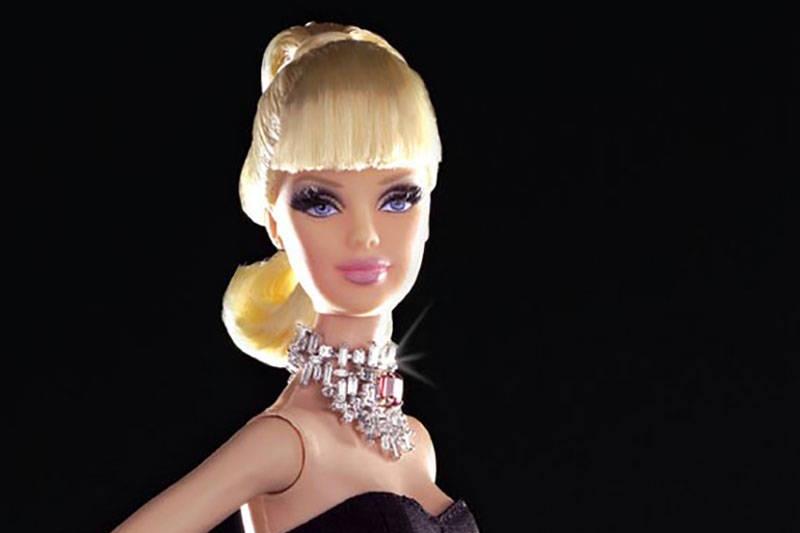 The most valuable Barbie in history came along in 2010 when Mattel hired jewelry designer Stefano Canturi to create this stunning and elegant doll. The result was a Barbie decorated in a rare, 1-carat Australian pink diamond.

To make the Barbie even more valuable, Canturi added in several 3-carat white diamonds. Christie’s sold the Barbie at auction for a staggering $302,000! The best part is that 100% of the proceeds went to the Breast Cancer Research Foundation.

Coming up, an actual wedding designer created this Barbie’s gown. 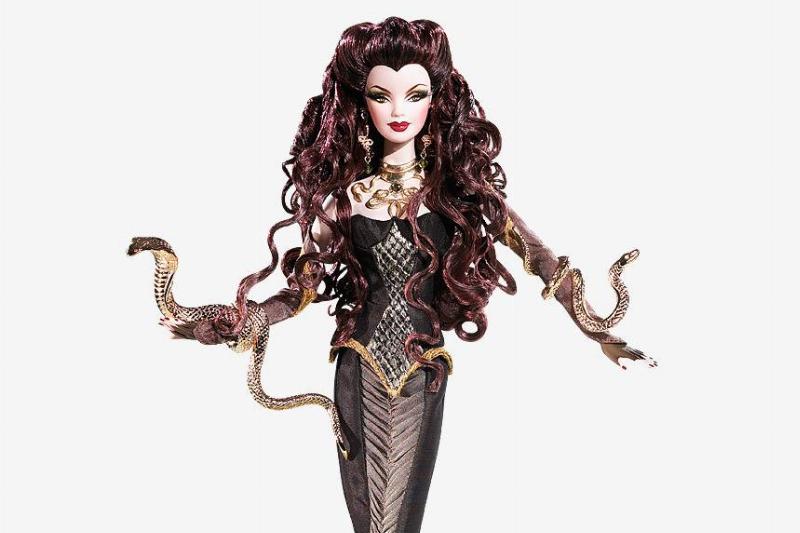 One of the most unique and eyecatching Barbies to ever exist is Barbie Doll as Medusa. As the name implies, the doll is modeled after none other than the Gorgon of Greek Mythology.

Complete with snake-like wavy hair and golden snakes wrapped around her arms, this Medusa-inspired doll hit the market in 2008 as part of Barbie’s Goddess Series. Today, the special doll has a $1,500 price tag, likely because of how rare it really is. 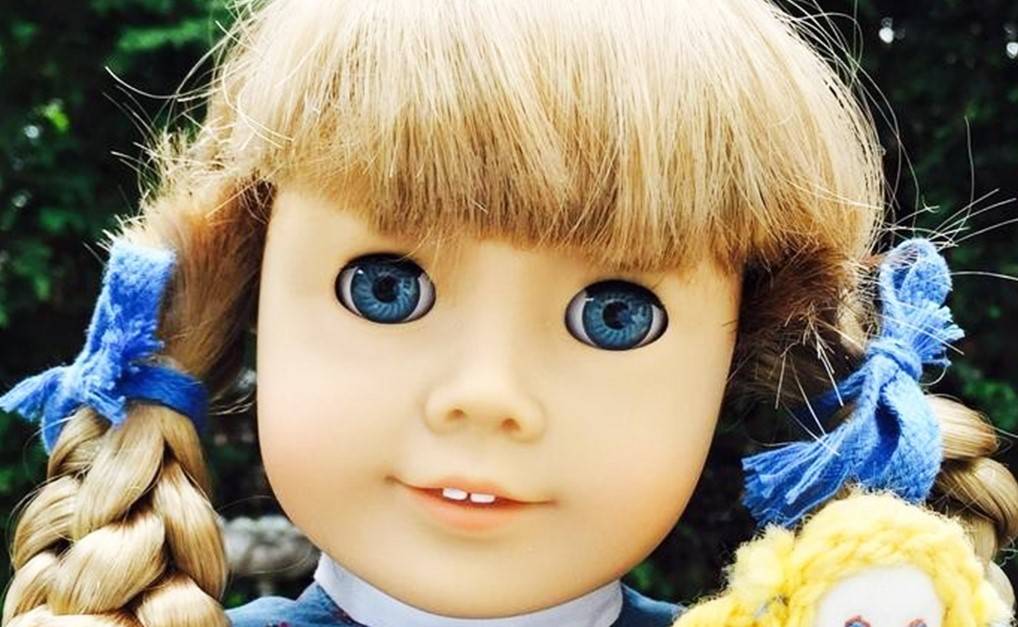 American Girl doll Kirsten Larson has a vintage backstory that makes her all the more charming to fans. She and her family are Swedish settlers who migrated to Minnesota.

Born in 1854, Kirsten experienced hardships out on the prairie, but she was able to successfully learn English after moving to the states. Since the doll was discontinued in 2010, her value has increased over the years. Today, collectors can expect to spend over $3,000 on this doll. 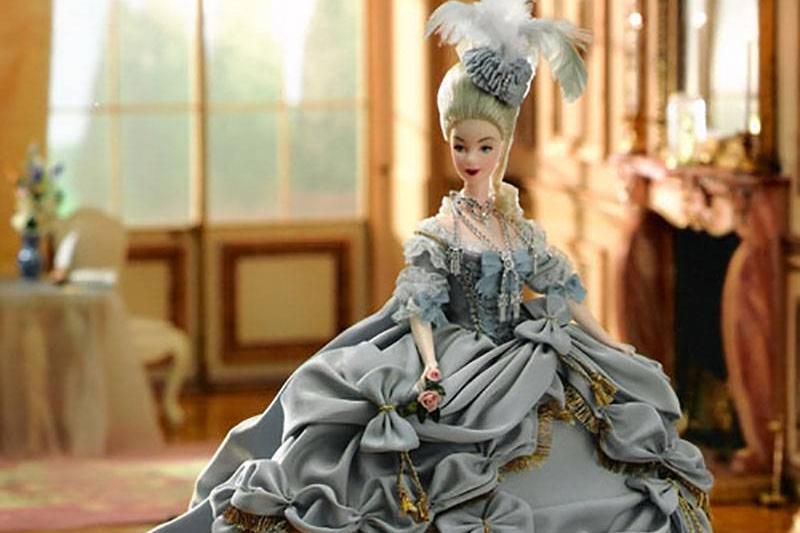 The Marie Antoinette Barbie is just as extravagant as you’d expect. Her enormous skirt is adorned with bows and gold thread and her ornate corset has sparkly silver detailing.

The doll is also wearing a fancy headpiece with large feathers poking out. The Marie Antoinette Barbie came out in 2003 as part of the Women of Royalty Series. The cherry on top is her porcelain roses, which contribute to this valuable doll’s $1,500 price tag. 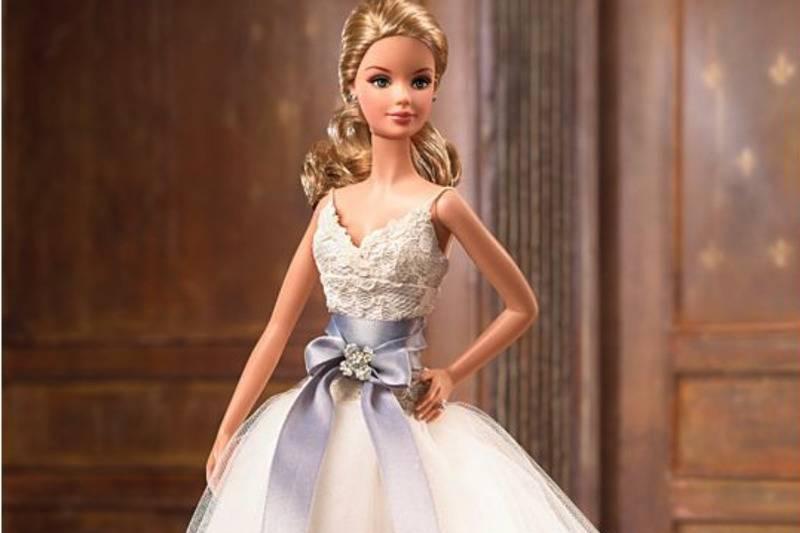 The platinum label dress was released in 2006 and has already accumulated a value of $1,600! The design features a lace top, silk bow, and a tulle skirt. It’s the closest someone could get to an authentic wedding dress for their Barbie. 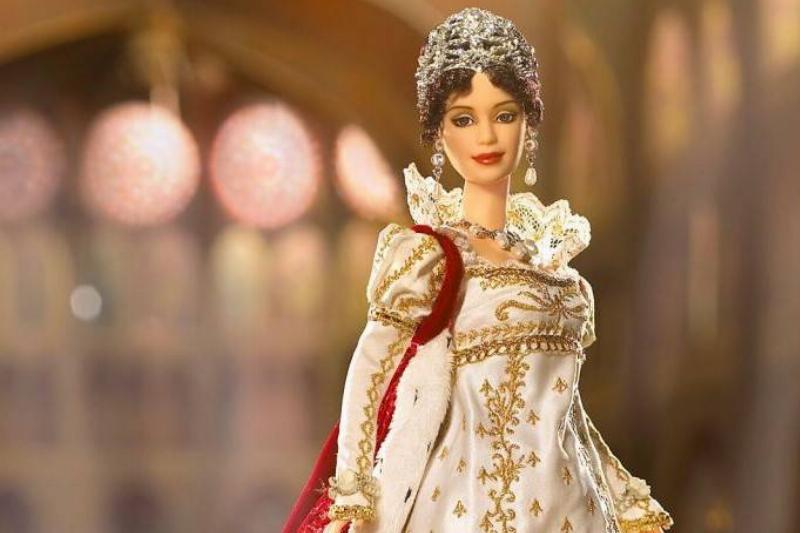 Modeled after Empress Josephine, this Barbie was released in 2005 as part of the Women of Royalty Series. The satin gown features ornate stitching and a furry red coat hanging from her shoulders.

The gown is permanently attached to the Barbie so the empress is always in her royal attire. Though the pearl accessories are faux, the elegant doll is worth an impressive $1,099, so long as it was kept in the box to preserve its condition.

Kim Kardashian was recently charged with promoting a cryptocurrency on her Instagram account without revealing that she was being paid to promote it. ...
Read more
TRENDING NEWS

Newspaper is your news, entertainment, music fashion website. We provide you with the latest breaking news and videos straight from the entertainment industry.